Getting to know your produce – heirloom and indigenous and recipe recommendations.

Intro: Our heirloom Arugula, Apollo is a Dutch strain that tends to be less bitter than other arugula while retaining its nutty flavour, and has large leaves.

Recipe: Arugula Salad
Bathe fresh arugula leaves in a large pot of water. Spread them out on a towel so they drip dry. Tear the arugula the leaves into a large salad bowl, compost the stalks (while they’re absolutely edible, they’re quite fibrous). Slice in thin slivers of 1 heirloom radish. Crumble in cheese (preferably goats), or tender paneer. Add olive oil, some fresh lime juice, salt, pepper.  Add in a quarter tea spoon of honey or one of our preserves. Sprinkle in a handful of roasted almond bits. Massage the salad. Enjoy! 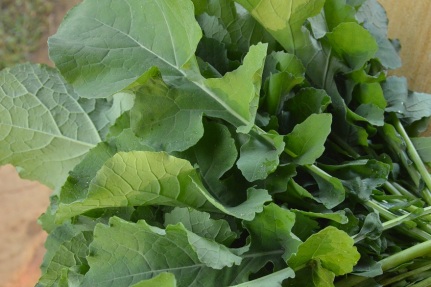 Nutrition: Known to be one of the most nutrient dense foods, Kale is loaded in Vitamin A, K, and C; and contains Vit B6, Manganese, Calcium, Copper, Potassium.

Bathe the kale leaves in a large pot of water. Spread them out on a towel to drip dry. Blend the dressing of tahini, coconut oil, lime juice. Break down the leaves into a large salad bowl and mix in all the ingredients, add salt and pepper to taste.  Hot Tip: Massage the salad well, kale is a tough leaf that likes to be worked to soak in the oils.

Nutrition: These delicate ones have a crunch of spice when eaten raw (in salads) and a mild mushroom flavour when cooked. They contain vital amino acids, calcium, and potassium.

Recipe: Moringa Flower Salad  While they can be cooked traditionally (sejwain ke phool), I’ve most enjoyed these raw, in salads. Toss them in with any leaf of the season, crumble in some feta, roasted almond slivers, edible flowers,, olive oil / coconut oil, date palm vinegar, and freshly crushed black pepper with a pinch of salt. Massage all the ingredients together well before serving.

Recipe: Simply prepare by boiling the shoots and toss them in sauteed onion flavoured in salt and turmeric. They can also be served as a side with butter and soya sauce, or added to stews, curries, soups. If you’re a pickler, they make for a delicious and healthy pickled snack.

This herb grows up to 20–50 cm tall, with rosette flat leaves, and a short rhizome underground, bearing swollen roots with dark tubers to up 7 cm long at their tips. It’s white showy flowers is usually what captures attention, that display themselves in the early weeks of the monsoons.

Chlorophytum tuberosum in the wild

Edible: The leaves (and roots) are edible. Remove the tough stalk with flowers. It’s leaves are tender, and when cooked have the texture of seaweed and an unassuming simple flavour. The leaves acquire a faint bitter taste as the rains continue, nothing that can’t be blanched out.

Foraging Time: Early monsoons. It disappears from the landscape as the monsoon progresses into the 4th week.

Foraging Note: While the root is edible with amazing nutritional properties, propagation through seed in the wild is very scarce. If you’re foraging this herb, it’s extremely important to leave behind the root tubers, else its hard to reestablish them in natural forests. (For the nutritional benefits of the root, locate farmers that have cropped the herb.)

Nutrition: The leaves are composed of carbohydrate, minerals, and fibers. Medicinally, the plant is used for anorexia and bronchitis.

Recipe: As most local recipes are, this was a simple prep. Wash leaves, chop, blanch for a couple seconds in boiling water, and lightly stir fry in a simple base of shallow fried onion, garlic, and some red chili.

Intro: This leafy annual is widespread from South America through India. It’s Nigerian name ‘soko yokoto’ stands for “make husbands fat and happy”. It’s hard to find a bug- or disease-infested plant, making it a keen food source as climatic variances increase in the future. And read on to learn about it’s Vit B9 properties.

Foraging Time: It can be foraged in Maharashtran forests mid-monsoon.

Nutrition: The leaves are extremely high in beta-carotene and folic acid. Beta-carotene is the yellow/orange pigment that gives vegetables and fruits their rich colors. The human body converts beta-carotene into vitamin A, used for healthy skin and mucus membranes, strong immune system, and good eye health and vision. Folic acid, folate, or Vitamin B9 is essential for the body to make DNA, RNA, and metabolize amino acids required for cell division. It’s one of the most common deficiencies seen in urban dwellers today, resulting in low numbers of red blood cells.  The leaves also contain vitamin E, ascorbic acid, calcium, iron, and protein.

Edible: The leaves, young stems and young inflorescences are edible and readily soften up in cooking.

Recipe: The leaves have a soft texture and a mild spinach-like taste. We simply saute in onion, garlic, and red chili.

Intro: Amaranth is (or will be) known for its seeds, with nutritional benefits on par with it’s foreign counterpart quinoa.  However, we’ll leave seed for it’s own discussion. The leaves were once savored by the ancient Aztecs, Mayans, Incas, and Adivasis in their staple diet.

The plant is an annual, often mistaken as a “weed” for it’s ability to show up uninvited. The stem, it’s distinguishing feature, grows erect from 10 cm – 2 m high, greenish to slightly reddish (especially near the base), with hairs/thorns. Alternate leaves, long-stalked, ranging from dull to shiny and reddish greens; leaf blade is oval to diamond-shaped; margins are smooth; tips are pointed or slightly notched. Small and green, flowers crowd at the top of the plant.

Edible: Tender leaves can be consumed raw, while the full grown leaves cooked as you would spinach. Amaranth has a mild flavour by itself.

Recipe: Locally, it’s prepared sauteed with onion, garlic, and red chili. A south Indian recipe boils amaranth leaves with pulses, mashed, stir-fried with light seasoning of red chilies and spices or cooked with tamarind gravy. Considering it’s excellent health benefits, I prefer to eat the leaves simply stir fried or better yet, raw in a salad. The tender ones are easier to palate such. Another recipe that meets my fancy is the Greek vlita – boil the green leaves (and stalks) until tender and serve dressed in vinegar/lemon juice and olive oil. It can be served with boiled potatoes, zucchini, or boiled egg. Add some freshly grated raw tomato and finely chopped raw garlic on top.

Nutrition: Sorrel is rich in vitamin C, and also contains vitamins A and B-6, iron, magnesium, potassium, and calcium. It contains beneficial organic compounds like polyphenolic acids, flavonoids, and anthocyanins. It provides a significant amount of dietary fiber, very few calories, and almost no fat.

Recipe: Sorrel has a unique and tangy flavour. It’s best enjoyed fresh in a salad (with cucumber, feta cheese, olive oil, lemon, and sprinkled with freshly crushed black pepper). It can also be added to dals and curries as a souring agent, instead of tomato. 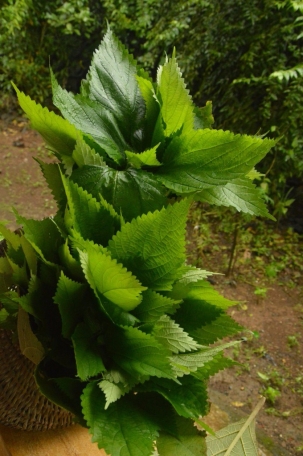 Intro: Nettle is a perennial plant that can be found across the globe. In India, it appears in forested land or even non-concreted areas in a city, in the monsoon. It’s leaves and stems are very hairy with stinging (and non-stinging) hairs, whose tips come off when touched, transforming the hair into a needle that injects several chemical compounds causing a painful sting, giving it its common name.